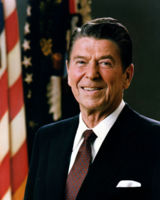 "Suffering From Twinklementia: Color Me Ronnie"

One day, having just slammed a triple-shot mocha in an effort to fight off a marauding hoard of the late-afternoon grumps, I made a new friend.

As I exited the coffee shop, a woman--a stranger to me--came up and said, "I see you all the time around here, and you always have such a twinkle in your eye. I know that means you are a naturally happy person, to have that sparkle. I can just tell from the way you smile. It's just like the twinkle Ronald Reagan always had in his eye; I mean, I always knew we were in good hands with him, not like nowadays with those guys they've got going. Yes, you're just like Reagan. But I don't even want to think about how he is now and whether or not that twinkle is gone. He just made me feel so safe and secure, but now when I think about it, I just feel so sad and as though it's the end of my world. What will I do when that twinkle is gone forever?"

Nervously, I pointed to the sky, shouting, "Look, it's, um, a satellite with military capabilities, and I'm late for a date with Leona Helmsley to discuss trickle down economics, so gotta dash!"

Then I hopped in my Honda hatchback and gunned it for the Arby's.
Tossed Out by Jocelyn at 12:09 AM

Whenever they mention a twinkle in my eye I explain that I'm extremely inebriated and to steer clear before I hurl all over them...and that I'm on my way to see Imelda Marcos shoes.

I wear glasses that have built in twinkles. So I got that problem solved.
Now I got to go twinkle...
I mean tinkle.

I don't trust anyone with a twinkle in their eye, or a twitch ... I have both so I'm not to be trusted at all.

Oh, I'd have to eliminate anyone who compared me to Ronald Reagan. Jane Wyeth, maybe. But Reagan? Never.

she's probably watching you right now. You should go underground...

Generally strangers run screaming in the other direction when I approach. But when they are bold enough to talk, the comments fall into two catgeories.

1. Something about the baldness of my head. "Oh yeah. I've been balding since I was 19. Thanks for the freaking newsflash from 1992, jackass," is my typical response. Then I go to Arbies in my Honda Accord hatchback.

What say you and me, we run for public office together, one day Jocelyn? There's no ego on our ticket: I'll be the VP if you want to make like Geena Davis and be President.

A twinkle in your eye, thus you are happy happy happy? I would have hit her over the head and asked, So, Do I still look happy to you?

Furiousball--I like how you kind of turn it into an offensive move on your part...and blame the booze.

Polyman3--How very clever of you, that whole glasses ploy. Maybe I could wear glasses on which I have open eyes, so I could then keep sleeping with no one the wiser.

Dan--So, um, you have trust issues?

Rhea--I'm with you. Since the woman on the street was attemting to be kind (weirdly so), I took it as a compliment...that I somehow look benevolent and faintly absent.

Choo-choo--That's why I currently do all my socializing in cyberspace. She'll never find me here.

Rocco--I'll have you know that my groom never reads my blog (what with taking Little Johnny to soccer practice and helping Susie find her skate key, he has trouble finding enough hours in the day). However, when I was chortling at your comment, he sat down and read it. So the insult has grown: he still doesn't read my blog, but he reads the comments on it, if you write one. I love the idea of an ego-less ticket (no, really, you can head it up...I'm happy with VP), but have to say we'd do better just abandoning running for office and having some Manhattans instead.

Jazz--I *did* hit her over the head later, with a potato cake from Arby's.

I can't imagine what I would say if someone compared me to Ronald Reagan.

I think I would probably twinkle madly while putting her ass in a sling. But that's just me.

Thanks for visiting my blog!

I finally figured out what Guliani has defeated! Graffiti.

Sure he gets clout for taking on terrists, but you may have heard that we are still facing this War on Terror, so it doesn't sound like he's won that battle.

But if I recall his big thing in the pre-9/11 world was to see to it that there was no trash or graffiti in NYC. And then I read somewhere that we live in a post-9/11 world and that 9/11 has changed everything. So maybe while Guliani is off fighting terrists, the grafiti bastards are back at it in NYC.

But I digress. Think of our ticket Jocelyn? You're out winning the War on Cold and I'm winning the War on Graffiti. Imagine if we can make the good folks of America afraid of pinkos with RED spray paint cans who are defacing our nation's public transportation with sayings like "Four legs good, two legs better."

Man if we can make that the enemy, people will forget all about Osama Bin laden and Iraq and the White House will be ours in 2008!! And we better get to the White House before those grafiti-crazed commie bastards spray paint quotes from the Communist Manifesto all over those pristine white walls.

Heartinsanfran--Yea, it remains perhaps the most unfavorable comparison I've ever had, and this in a life of being a life of many...yet the old gal that day meant well and was obviously caught up in her own little world of angst.

Skittles--Fun to "see" you here.

Rocco--You maniac. I'm loving your deep analytical skills. All I ask for our ticket is that Barack Obama be featured, in some/any capacity, once we win--let's put him in the cabinet (not the cupboard, ya nutter) as Secretary of Charisma, if nothing else. Oh, and it'll be nice to have Groom visit the blog again tomorrow, after I tell him you posted a comment. Btw, I'm thinking of asking you to appear as Guest Blogger...you've got it in you.

Its scary to think that there are people on this planet who think we were in good hands with Ronal RayGun. Yikes!!

OMG..I WISH...I wish someone would say something like that to me. I would stop, smile, and moon them, shouting: "How bout now? Am I still twinkling now?"

Reagan? Sheesh...call me Bush and I'll just punch you.

I always thought it was called "Alzheimers."