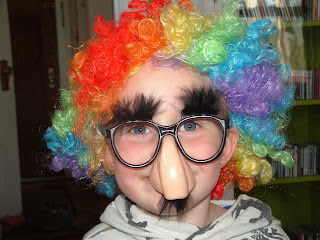 "Despite the Vomit, Why We Don't Send the Lad to Be Fostered at the Nearest Castle"

He could end up a page to some dashing knight if we did, you know. And he'd learn the ins and outs of keeping chain mail rust free, which is a skill I'd like at least one member of the family to have.

Yet we keep him.

I was reminded the other morning why that is.

At 7 a.m., he burst into our bedroom, hollering, "Can my night-time be done now? I'm a little sweaty."

I like the fact that he has his own, personal night-time. He really does. It often ends at 3 a.m., when he gets up and asks to look at books for a few hours in the office room, so as not to awake his sister, Model Sleeper Girl (aka "The One We Want to Keep"), whose bed is adjacent to his. But on this particular morning, he had actually slept through the night--well, largely, anyhow, only getting up three times for water, to announce he didn't like the dark, and for general morale-boosting conversation breaks. 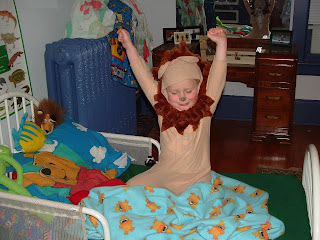 So, okay, kiddle, your night can be done now. Just stop being sweaty before you leap into bed with us, ja? Go wipe yourself down with a ducky blankie or something, and then climb aboard.

Crawling under the covers and nuzzling into me, he was uncharacteristically quiet for a minute and a half. Then the newly-anointed-four-year-old threw out this day-opener: "In China, does it really rain cherry blossoms?"

#1, Child, where do you get your material? (Turns out it's in a Charlie and Lola episode. If you have kids in your life, or if you are a smart adult without kids, you might check into these books and videos. Lola proclaims she will not ever, never eat a tomato, and she has an invisible friend named Soren Lorenson. Lola drinks pink milk, and she rocks.)

#2, Well, yea, sorta. From the trees. Sometimes. Actually, even more in Japan, technically.

#3, Man, do I like a kid who genuinely wants to know the answer to that question. Even if it is 7 a.m., and a pall of darkness still hangs over my brain.

Then the Niblet fell quiet again. I could tell he was pondering, as he began stroking his fingers across his skin.

Breaking the silence, he observed, "My hands are very soft, like a very soft pillowcase." 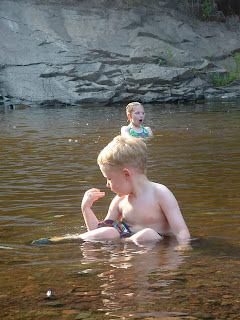 Quirky-son once asked me if ducks could land in trees. He also thinks the wind is just the trees whispering.

And he sleeps through the night.

Once I considered walking away from my marriage. It was a shitty time and I don't think anyone would have blamed me. However, I stayed and while things aren't always great, they're better and now I don't see the future without seeing my husband there next to me (kind of like the dream Nicolas Cage had at the end of Raising Arizona.)

ps- I adore Charlie and Lola. Esp. Lola I love the way she says "Char-LEEE'.

Though that would be a little tough to do, eh?

What a fantastic kid, I love the line about can my night-time be over now, I'm a little sweaty, such a little kid sense. What a delight. I wouldn't send him to the castle if I were you...maybe you could take a part-time apprenticship in chain-mail maintenance, who knows, it might be interesting;-)

I like the last picture, it looks like his sister is coming out of his head, good thing his hands area as soft as soft pillow cases.

I love what comes out of my kids' mouths, right now my son is trying to tell jokes and and he makes up his own jokes. They are pretty much only funny to him and me. and that's fine with me.

Love the way you write. Fabulous.

You should still send him to the castle though - this is no time for sentimentality - he could be contributing to the household income and building a career for himself. If he doesn't get trampled by an errant horse, he could even end up a Knight Errant's page - how cool would that be?

Stepping Over the Junk said...

this is priceless. I love keeping what my kids say and reminding myself when they say it that 10 minutes ago when I was tearing my hair out, it is all worth it.

I almost stopped painting once. Because I was working outside the home and it frustrated me to be too tired at night to paint, prepare for a show or do a job for someone. Now, I have less pay but paint at home for a living. (okay, for half a living, the other half is child support)

Are you kidding? All three kids have made it all the way to the windowsill before their moment of redemption! LOL

I have a Devilteen, and you ask if I've ever wanted to trade her in???
Truly though, she really cracks me up, she has her own language ie: calls me 'muffler' instead of mother,she'd never go to school if I just said 'have a day'....and you know when you crook a finger to tell someone to come here?... she always did that UPSIDE DOWN LOL

Let's see, to answer your last question, how about this: just about everything in my house.

Computer ... car ... light fixtures ... fridge (though that has not redeemed itself ... I just keep it because I need the darn thing).

No people on that list, really, though the boy drives me nuts sometimes, I have yet to feel the urge to toss him out the window. Maybe just in that general direction.

When I fled California for the East Coast I nearly chucked my television and all my high school yearbooks in a fit of packing insanity when I realized that there was just too damned much crap in my life. Apparently, those items seemed most representative of the crappy nature of my life. I reckon they were just representative of the parts that I valued the least. Instead I left the couch and still ran fast and hard and didn't shed a nostalgic tear until I got to Albuquerque.

Not sure they've redemed themselves, but I've used them all since I moved so it wasn't entirely wasted effort.

OK. That's wierd. I posted a comment yesterday and it apparently got eaten. So, really, maybe this computer would qualify. But only if this comment posts. I'd also put up our shameful SUV, which I hate but which we need in order to get to work about 20 days a year. Including this week.

The kids seem on some sort of permanent probation. Thanks to mommy brain, I can never remember the things that keep them from being sent up the river, but I recall that it involves laughing on my part.

I have a love/hate relationship with my digital SLR, too. Just not as funny.

ps Don't ask why this comment appears on the post below it, too. I was having a few problems with word verification and... oh, never mind. Just don't ask.

I heard on the news, not all that long ago, that it was raining frogs in Germany. Then they all exploded. That's right - they exploded. I forget why, but there was a reason for it. Must have been icky.

It is these memories that cause us to fall in love with our children more and more. We will never forget memories like that... Especially if we blog them for posterity sake.

You make me laugh Jocelyn, thanks, and I could use it to-day.
I left you a response to your comment on my blog. A lttle late, but I've just returned from a funeral across the country.
I love your writing, I'll be back.
V.