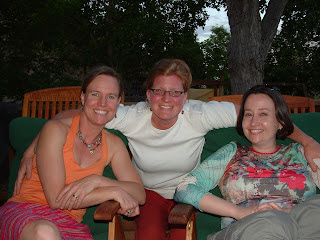 I'm currently the bologna in a Colorado sandwich.

I'm aware makes no sense, so don't scrutinize it too closely. Cutting through my nonsense, what I'm saying is that I'm currently in Minnesota, having recently come back from a kamikaze weekend in Colorado. And tomorrow, the family and I are taking off for, you guessed it, Colorado.

Compared to my opening statement, that makes lots of sense, right?

Last weekend, a good friend of mine from college who lives outside of Boulder, CO (she's in the sassy orange halter top in the photo here) was the recipient of a suprise 40th birthday party. Her husband, knowing how wiley she is, threw the party six weeks before her actual birthday; in addition to that, he went through all sorts of machinations, created tangles of lies, and even went so far as to fake a phone call or two in her presence...and if that isn't the definition of a loving relationship, I don't know what is.

Because my college years were a floodlit time in my life--when everything seemed heightened and special and life changing and full of promise--making the trip to Colorado for a patio-top restaurant party to honor this friend seemed well worth the effort. Of course, since I was so busy being all floodlit and stuff, I ended up majoring in English in college and then becoming a teacher, which means I now don't make enough money to pay for such a boondoggle weekend myself. Enter My Benefactress (the brunette in the photo--and if you want to say anything about her like "nice rack," go ahead. She can take it), the pal who funded the trip. In my defense, I would like to stress that, although she paid for plane fare, car rental, and hotel room, I did shell out on a $6.00 toll road, thus carrying my weight.

The party was gratifyingly fun, the after party back at their house even more so. Stir in some good meals, a lovely run up Boulder Creek canyon one morning, and my introduction to a new drink called a Dark and Stormy (check it, cocktail fiends: put some ice in a glass, squeeze some lime over it, toss in a shot or two of rum, top it with ginger brew [non-alcoholic...kind of a ginger soda pop, available at co-ops or organic food type shops], and, if you've got it, mash up some fresh ginger and stir it in, too), and the weekend was outrageously happy making.

I also considered it a scouting mission for the upcoming family road trip. Yup, we're leaving on Monday, the 18th, and will be driving a huge loop around the West for almost three weeks. First, we'll head down to Austin, MN, where I used to live, for a visit with a sainted friend; then we'll head through Iowa into Nebraska, where we'll stop over in Lincoln for many hours of play in the tremendous children's museum there (seriously, this is the third time we've worked that museum into our trip plans), eventually meandering into Colorado, where we'll see all sorts of friends in Denver and Boulder (including my sister, freshly back in Denver after her two years in Guatemala); after that, it's up through Wyoming, stopping to see my great-aunt in Cody, and then heaving over, bravely, for a glimpse of boiling mud pots in Yellowstone Park; after all this, we'll drive to Billings to help my mom clean out her storage locker there (she's now a Californian) before we hire a trailer to help us haul our storage locker spoils across North Dakota and back to Minnesota. At that point, we'll collapse in a heap and stare at the new furniture in despair, as it's not like we actually have room for it. But how very fun to go get it!

Indeedy, I've just been to Colorado, and now I'm heading there again. I do so love the shortness of breath and leathery skin I get while there, you see.

So I'll be trying to post from the road and check in occasionally. But my trolling through your blogs, which has already taken a hit this summer since I'm never in my office, which is where all the best computer loafing takes place, may suffer even more.

However, I have little copies of each of your avatars framed and hanging in a shrine in the corner of my dining room, and I'm hiring a neighbor kid to come light the candles and incense in your honor twice a week, so I'm certain you'll still feel the lurve, even in my absence.

And, even though I do intend to keep posting with my usual regular irregularity, if you start to miss the feeling of Jocelyn Holding Forth, just come here and gaze upon this photo 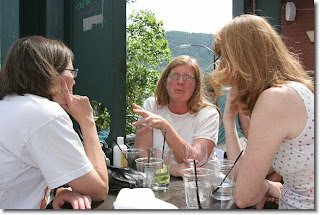 The sight of me, mid-monologue, is certain to quash any wistful pangs you might be feeling. I'm here for ya like that.

Have a great road trip! Post as often as you can for us O Mighty Crisis junkies.

Have a great trip! Sounds like you'll need a few weeks off after your vacation!

Waaaah! I wanna go too. Once would be sufficient for me, thank you.

Seriously, great to see you having a great time with your friends. Have fun with your family. Three weeks is one tiring, ah, I mean exciting road trip! Haha!

"I'm the bologna in a Colorado sandwish"

Jocelyn, you make me giggle. And I too marvel at the way YOUR brain works. Keep it coming!

See, I'm thinking you were actually whistling the whistle solo to John Lennon's Jealous Guy. At least that's exactly what a boloney would be doing in Denver if it were alive.

Totally jealous. I hardly go on trips (except in my head).

Have a good time.

Just reading about your schedule made me tired. Have a safe trip, and we'll all be here waiting for you when you get back!

Wow, what great friends you have! I love road trips too. The boiling mud pots of Yellowstone Park are really the tip of a Super Volcano, so tread carefully because that would lead to an actual Mighty Crisis. :)
Have a great trip, blogland will miss you!

Er...all those places you listed are in the east, dear. You may be a terrific English teacher, but your geography could use a little brushing up on :) Then again, if I travelled very far west I'd end up wet...

Have fun with the family, no matter where you end up!

i would like to request that you specify your neighbor only burn vanilla scented candles at the shrine dedicated to me. incense tends to give me a headache. thank you for your attention in this matter.

oh, and if you don' tmind can i have the set of wooden sald bowls that have been collecting dust over in the corner of the storage locker. i could really use them. mayeb you could give them to me in nebraska because if mr linme ever wins that battle of trying to move us there i am sure i'll live at the children's museum just so i have somethign to do.

have a GREAT trip!

please pardon the myriad typos in that last comment. a dyslexic monkey possessed me (it's the spirit your neighbor summoned when she burnt incense) and i bear no actual responsibility for the form of it, though i will admit to the content.

Have a wonderful trip, Jocelyn. I miss you already.

OK, OK, OK ... I must correct your opening statement. You were not the bologna in a Colorado sandwich. You had a Duluth sandwich on Colorado bread. Nobody calls a sandwich by the bread's name. See ... the Colorado trips flanked, bread-like, your return to Duluth. Get it?

Anyway, have fun in Colorado. Enjoy your temporary bug/humidity-free existence.

Hurrah for summer road trips... and shined pictures of me!
Looking forward to some interesting Jocelyn style anecdotes...

Wow, you can even talk with your mouth shut - respect, Jocelyn!

Have a jolly holiday.

Wow, that sounds like fun! You'll be back around the time I leave for my vacation, so we won't be seeing too much of each other in blogland this summer. Yellowstone is incredible, I went there on my honeymoon (kind of a strange place for a honeymoon, but original in any case). Have a great time and then come back and blog about it.

have a wonderful trip Oscar...

Damn. Missing your bloggy presence already. I will console myself as upon your return there shall be many Jocelyn-related tales of adventure and really wild things to read.

(Much luck with the long car trip with small ones. Need some valium to go in your road milkshakes?)

Sounds like an absolute blast, Jocelyn! (Both the 40th and the road trip!) You friends look really zippy and fun!)
We're stuck in school till the 29th! How the heck do you get ut so early?!!

I hate to tell you this, but you were on ecstasy in college.

sorry to have neglected my duty to entertain you....

In other words, I just made an epic post.... and now I must wipe myself

if you are bored and have like, 3 hours to kill, come on by and read it, it is all plagerized.

Love that first photo, and the secnd one made me laugh. Sounds like a good time, you road tripper, you.