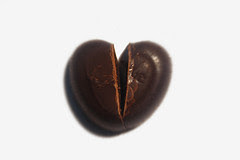 Dear Bicycle Commuter Rocketing Off the Trail by Crosley Street at Dusk:

You will never know how close you came to a kismetical meeting with the Love of Your Life tonight.

So focused were you on getting home after a long day at the--what?--H & R Block that you didn't even see me coming, didn't even notice The Future in a Pair of Running Tights barreling towards you, didn't even register that my strides were occasionally punctuated by a sexy gut clutch. No, you were all about the blinking red light on the back of your bike; the rubber bands saving your pants from their fate as derailleur fodder; the bungee cord strapping your briefcase onto the rack in the back.

Yoo-hoo! Honey? I have a rack in the front. And you missed out on it entirely. So absorbed were you, I can only imagine you must have been mentally pre-heating your microwave for the Hot Pocket earmarked as "Wednesday's Dinner." But Lance? Sweet Lance? If you'd only slowed down, you could have become my personal Hot Pocket and I your buffet for life.

When you zipped out of the wooded trail like that--dreaming of a stuffed sandwich cooked in a "crisping sleeve"--you cut off our potential intersection, our chance to fulfill a destiny. I was heading straight for that trail and those woods, Lance, as I clutched my intestines.

If you'd come along ten seconds later, our future "Love at First Sight" story, one that would have been recounted ad infinitum during Scrabble tournaments with the neighbors, would have involved me, in the woods, crouching beneath a tree, pants down, charmingly making an orificial offering. The envoy to the telling of Our Story, of course, would have been: Some things can't be stopped--can they, darling?--and when it's time, it's time.

Unfortunately, tonight was not our time. Woefully, if you'd simply stopped for a quick drink of water on the way home, or checked your Civil War Re-Enacters' list-serve emails one more time at the office...if you'd just delayed your journey by a mere ten seconds, Lance, you would have, Hosannah on the Highest, encountered my pasty white buttocks reflecting off the moonlit crust of snow--and this, in turn, would have sent you toppling madly over the romantic precipice d'Amour as, with crashing insight, you apprehended what a rare broad you'd lit upon.

So much could have been gleaned about your future wife from that brief encounter, if only you'd lifted your head from the handlebars, Lance. Specifically:

1) She eats her recommended daily servings of fruit.

2) She runs. And sometimes she has them. But not tonight, praise granola, not tonight. Tonight was more of a well-controlled, artfully-constructed valentine in the snow. Had she known your name, Lance, she would have added it in as a final touch--in cursive. She can do that. How flat your future will be for having missed this Hot Pocket-Free Mess.

3) She is a creative problem solver. From your perch on the bike seat, you easily would have born witness as she troubleshot the "what to use as Nature's toilet paper when all leaves are covered by a foot of snow?" dilemma. How you would have smiled, chortled, clapped even, to see her pack icy snowball after icy snowball and vigorously apply them to her nethers. That's the kind of thinking that keeps a relationship spicy, decade after decade.

4) She is environmentally conscious. In fact, when she's not blazing every light in the house and driving the mini-van to Target to buy Little Debbies, she is--clearly--a devoted composter. Moreover, come Spring, a single brave tendril shall unfurl from a certain spot just off the trail in the woods by Crosley Street. Your near-wife renews the earth. That could have been our spot, our tendril.

5) She is a developer. Look at how she laid track there over top the bare trail. Now that's progress.

6) She's already married. Even a bulky helmet couldn't block the glint of her wedding ring as she scratched away at the birch tree next to her, considering the bark's advantages over the snowball's as a posterior cleanser. Yes, Lance, as the ring on her finger indicates, this woman knows how to commit, and she's not afraid to open her heart to the emotional potential of Hot Pockets a Deux. She'd have ridden tandem with you, Lance, off into what remained of the sunset. Her first husband would have understood; he would have filled the marital void by going to see Juno and chow on a bag of popcorn, size large (free refills).


However, as with so many great love stories, and so many drunken wedding nights, you were about ten seconds too early, Lance. The universe threw us towards each other tonight, but we fumbled the opportunity--and the universe, disgusted with our abuse of its plan, retreated, pouted, and moped on a futon for three hours. Then it logged on to E-bay and bid on a vintage Fisher Price airport.

The universe, in its infinite wisdom, knows shopping is always the best therapy.

Thus, tonight: the universe made a bid; you made "Deal or No Deal"; I made a poo.

Had we connected there in the woods (next to the steaming chocolate heart) and fallen in love (over a set of symmetrical white buttocks) and dated briefly (three pints at The Brewhouse, tops) before marrying barefoot at Machu Picchu with my current husband officiating (he has a license from the back of Rolling Stone), just know this, Lance:

I would always, always have referred to you, with a small quiver of love in my voice,

Husband Number Two.
Tossed Out by Jocelyn at 12:44 AM

Ahhh, I do love waking up to you! x

What is it about having to go...hiding behind a bush...and EVERYONE Shows up...

I'd ask you to marry me.

hehe ... ten seconds can change everything!

haha! is there anything sexier than an orificial offering? Gross.

Oh, dear God, I think I just blew something on my laptop, what with all the coffee dripping out of my nose. You. Are. Priceless.

You are insane. I love you.

i am soooo glad i was not drinking anything while reading this.

i shall forever have burned into my memory the image of your bare butt in the moonlight as you scrape together snowballs for use as a frozen bidet.

(sigh) For the loss of one so special.

You ARE going to submit your brilliant alternate use of the common snowball to some magazine, say Reader's Digest? I'm sure I don't speak alone when I say that this is the sort of brilliant bit of survival skill that everyone should know. For my part, I shall pass it on to my own #1, who has found himself on his own trail run without an adequate tissue substitute more than once.

I'm pretty sure Wilde coined the phrase "my personal Hot Pocket" didn't he?

"A little sincerity is a dangerous thing, and a great deal of it is absolutely fatal and my personal Hot Pocket brings all the boys to the yard."

So many qualities - have you matched them to the Chinese Zodiac year?
BEst wishes

Ah, the injustice of it all! How could the Universe deny you such a well-deserved love story? Well, I say to the Universe "Poo to you with knobs on!" Because there were knobs on it, right? ;)

That was terrific--do you suppose you could get writing on some collaterals for me to pass out to potential dates? I mean, because, you've got the savvy persuasive writing skills honed.

LMFAO
That. Was. Awesome!
Brava!

Namaste.
I honour your resourcefulness.
And your balance!

One of the unexpected perks of being a volunteer firefighter is that I have a key that opens not one but two municipal buildings in town should I ever have an emergency need. I gladly serve the community in exchange for this magnificent downtown 'executive washroom' key.

Lookee here, I'm up to 17th position. I appreciate your restraint in not taking a photo of the real steaming chocolate heart. Give my regards to husband #1.

Bless you!
The universal clock can be so cruel!

You know, having missed the show - but having it lovingly recapped for me here - I've got to say that the Hot Pocket may still have been the right choice last night.

I mean, it had broccoli and cheese.

OMG this was absolutely beautiful. It's true a minute can change a life :)

Remind me to always look down when walking in the woods.

You have forever changed the meaning of "steaming chocolate."

From now on, when someone asks me a no-brainer, I shall reply 'Does Joecelyn shit in the woods?'

Question: "Was that to damned funny?"

Answer: "Does a Jocelyn shit in the woods?"

OMG, you kill me. Who else could talk about dumping in such a humorous fashion? Jeebus, Does Jocelyn shit in the woods? Why yes, son, she does and you would too cuz when ya gotta go, ya gotta go. But please don't reference chocolate and poop together in the same post ever again!

What a hoot! My husband can relate as he had to squat by a tree in the middle of Central Park during a 10km road race once!

How big of snow-tires do you need for biking in Duluth this time of year.

Okay, this was very, very funny as always...but it conjures up an image I just do NOT need in my head!

(And the first two letters in my word verification are bm!)

Jocelyn, I really, really hate poo and would rather gouge my eyeballs out with a rusty nail than to take a poo outside, but I still love you.

You really, really should watch THIS.

Indeed. I had husband number 2 picked out. I know his name. He's a friend! But recently husband 2 is paling in comparison to the real deal. A photo revealed Age and Significant Weight Gain. Hmmm. I am in the market for a younger model, one of taut tummy and yes, those biker thighs.

Wow. I would have totally stopped and offered a tissue. I'm good like that.

OMG you are too funny! too funny...

Mmm ... poop in the woods and Hot Pockets. I'm glad I read this before eating.

Heavens to Betsy! Thank goodness it had been snowing, birch bark is a bit rough on the ol' derriere. Husband No. 2 - snigger.

you haven't popped in on me, but you won the giveaway at madness, madness i say! email me!

*clapclapclap* Bravo! I enjoyed that immensely. And I've missed a lot in the past two weeks...
It's a good thing you were in the woods with those runnner's trots:) We're in suburbia, with nowhere to GO.

I demand you post this as a missed connection on Craigslist.

*sniff sniff* So tragic. Ships passing in the night. Sigh. How almost romantic.

And Jocelyn, yours is the only Valentine story I ever read this or any other year that mentioned poo. Bless you. :)