"Next Up: A Horseless Carriage" 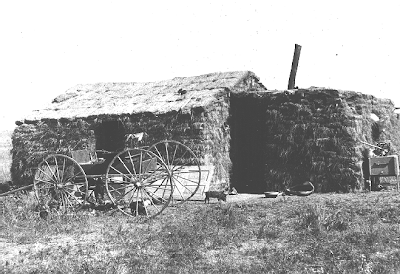 "Giddyup!" I hollered to my team after a long day of plowing furrows in the west field. They were whupped, but I had one more section to turn over before heading back into the cool of the soddy to soak up bacon grease with a hunk of hardtack.

Moments later, I slowed the mules and peered out from under my sun bonnet as I spied my two ragamuffins coming at me, hammer and tongs. What was that in their hands? They hadn't dipped into the last of the horehound candy from Christmas, now had they?

No. That wasn't it. What did they have there? Surely not one of those new-fangled, two-wheeled velocipedes?

Pshaw, but it was something much smaller. A new piece of calico? I had been reckoning I needed some new Sunday habiliments.

Gadzooks, but I'd never seen the like. They were holding something as small as the shrew that had bumfuzzled the cornpatch last summer. They'd best not have a shrew there, or I'd tan their hides and barter them for white sugar at the General Mercantile!

"What've you there, you rapscallions?" I asked, discommoded that I'd never get my churning set that night with such interruptions--and never a lick of help from their 'shine guzzling pa, neither, him always passed out in the lean-to.

"Make it quick now," I hawed. "Don't come showing me how your corn cob doll got scalped again when I've work to do. You know winter sets in fast and hard out here on the prairie, and there's no resting 'til the root cellar's full up."

"Jehosephat, Girl. Spit it out afore the shoats are ready for butchering. Enough of your palaver."

"Yea, so, Mom? It's, like, 2008 and all? Why are you so weird? We actually don't live on the prairie, and you just filled up the back of the mini-van yesterday with bags of groceries at the Cub Foods, so I'm not quite sure why you're out in the yard here, pretending to sow stuff. Plus, you just planted my soccer ball in the sand box."

"Actually, Mom? We don't really call you 'Ma,' and that cloud is more like stink smoke from the refinery. Anyhow, Mom, if we can snap you back to reality for a minute here, we've got a birthday present for you."

"Shucks and bother, but birthdays are nothing but a vexation. I am graveled that you pay them any mind when you know full well tomorrow's washing day, and we're plumb out of lye." My mind, to tell you true, was cogitating on what a tight scratch it would be to hamper a new school marm into crossing the Mississippi and taking on that passle of ne'r-do-wells in the one-room schoolhouse.

"Get with it, Mom. We've all decided it's time for you to join the 21st Century. You refuse to carry a cell phone, but that doesn't mean you can't start enjoying an Ipod. So we got you one! Happy birthday! Now you don't have to go out running wearing those big old antennaed headphones like you do," Niblet and Girl went on at exceeding length.

"Eye pawed? What would I go and want something like that for?" I groused, mentally peppering some shot into the grouse that had just flushed out of the brush next to me.

"Cuz, Mom, it's okay if technology is your friend. Don't be afraid. We'll all be there with you. We'll show you how to download a Podcast, how to burn CD's, how to listen to your beloved Jayhawks as you sweat," they harrowed up.

"Hawk? Where? It'd better not be after the barn cats again!"

Sighing, the family reached out gently, unlaced my too-tight stays, and led me to the computer,

And out in the fields the next day, as I put in an acre of peas, I rocked out, prim and proper-like, to Husker Du, Wilco, The Replacements, and the Original Broadway Cast Recording of Cats.

The day after that, I didn't put in any peas or even head to the fields. I just rocked out.

Hmmm. Maybe there's something to this 21st Century after all.

Next year, I hope they get me one of them high-fallutin' gee-gaws called a "safety pin."

I've got a rip in my drawers that needs hitchin' up.
Tossed Out by Jocelyn at 12:06 AM

I gotsa hitch in my get along that only an eye pawed will fixin.

Goodness me, I've come over all nostalgic for some other country's past. How peculiar. Pass the moonshine.

"I rocked out, prim and proper-like, to Husker Du, Wilco, The Replacements, and the Original Broadway Cast Recording of Cats."

SNORT, snicker, giggle. You my dear make me smile. You are the best.

being somewhat of a luddite myself i can appreciate your hesitance but i will also testify to the magnificence to both ipods AND safety pins. you got some right considerate yunguns there, ma'am.

(a) Happy Birthday!
(b) "Why are you so weird?" I can't wait for my children to say that to me!
(c) You dun give me a hankerin' for some Wilco. Yeeehaw!

And somehow, I KNEW it was one o'them confounded eye-paweds even a'fore I got through the post.

LOL, that Furiousball is a hoot, innit he?
Congrats on the ipod, happy birthday to you, so glad you old timers can get accustom to the strange modern ways.
Personally, I am looking to upgrade my little mp3 player to a Zune...mmmmm Zune lust floods me like waves

Even a goody two shoes like Laura Ingalls would've neglected the peas after such a gift.

By the way, is "Husker Du" a band somehow? That is norwegian and means "do you remember"

I'm sure Laura Ingalls will forgive you. Plus, it will make the plantin' and churnin' and carpet beatin' go all the faster.

I got 2 balloons for my birthday.
1 full of macaroni and the other full of water. Maybe I should increase my kid's allowances.

Look out your window. See that green glow? That's me! You got an Ipod! Cool. Beans. To heck with cell phones, that's just a way to let other people pester you--but an IPod! Congrats and happy birthday:)

"Don't come showing me how your corn cob doll got scalped again..."
and "rapscallions"
Oh, how you make me lol!
What darling sweetlings you have!

Happy Birthday! Half-pint? You one of them Little House on the Prarie fans? Hope that there sawker bawl grows inter some good crops. And ya'll be carful about havin' yer eye pawed, that might be downright dangerous. Specially if it's got its claws out. :)

Fantastic. I laughed so hard my corn-cob pipe fell plumb out of my mouth and stained my apprentice smithy smock.

heheh Congratulations on the iPod ... aren't they grand?!?!

We *just* got cell phones and I felt so amish previously.

Jest be cearful not to let Niblet take yer eye pawed to a ski meet. It may ne're be of more use than the aforementioned shrew theretofore, therabouts.