In my youth, a popular comic strip drawn by Stan Lynde called Rick O'Shay ran in the Billings Gazette. Oh, didn't we chuckle at the exploits of that sheriff and the ragbag crew that staggered across the panels of his life. Lawsy, but we chortled at the antics of O'Shay's preciously-monikered friends and colleagues in the Western town of Conniption: "Hipshot Percussion," "Basil Metabolism," "Quyat Burp," and, of course, the Native-American "Crazy Quilt. "

We could hardly wait for the 4:00 a.m. thump on the front porch that signaled the paper boy had delivered our daily dose of cowboy cartooning. Up we shot from our waterbeds, hurtling the Etch-A-Sketch, leaping the Clue gameboard, somersaulting the Lincoln Logs in our quest to be the first to scan that day's strip. Would Crazy Quilt win the affections Chief Crazy Neck's daughter Moonglow? Would Stan Lynde have managed to showcase the word "howsomever" in an entirely new way?

This was big stuff for us small fry.

Thus, you can imagine our excitement when a local Rick O'Shay contest was announced. Children from across our arid burg were invited to dress up as their favorite characters from the strip and submit to judging. The winner would win a plaque-ish thing and an interview on the local news. Because Sheriff Rick O'Shay admired nothing more than plaques and news, we knew our participation would please him.

Of course, when one is four years old, as I was at the time, one's "favorite character" often amounts to "what Mom wants to dress her kid in." Turns out, Mom had a feather and swimsuit that were itching for an outing, and in this fashion, my character was chosen.

Clearly, my heroic brother, who once held up both hands to stop oncoming traffic on a busy street so that I might cross safely, would be 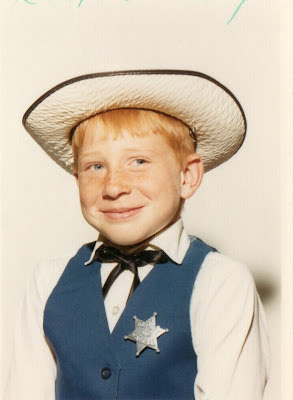 
My five-year-old sister, with her love of shimmying to the tunes of Donny Osmond and organizing girls into teams for popsicle-eating contests, was a natural for the owner of the town's dancehall: 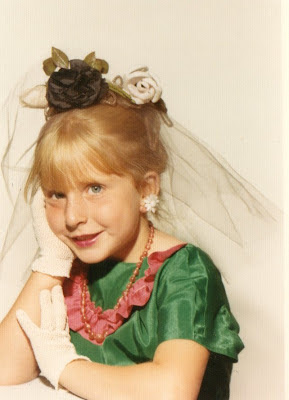 For me? Well, Mom had the swimsuit. She had the feather. She understood there was a strip involved. Somehow sensing my future love of pouring shots and sitting on laps, she decked me out as 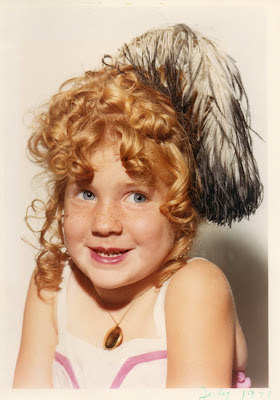 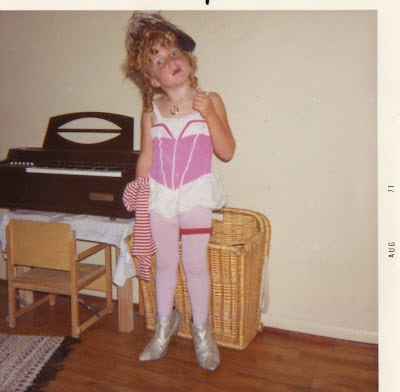 Despite my innate sense of modesty, I'll have you know, friends, that the town of Billings had a Conniption over me. They melted at the sight of a four-year-old streetwalker, so full of promise, with her whole career in front of her. Particularly when my convincing whoreishness was contextualized during the judging, I was a standout: so fresh compared to those hardened 12-year-olds...so Brooke Shields in Pretty Baby...so able to rock the look of garter and heels and locket, the look of a girl who means to communicate "You can have me for ten minutes for twenty dollars; the back seat's fine. And do you have any Barbies or an Easy-Bake oven?" 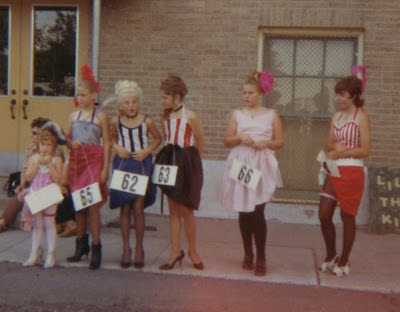 Sweet Heidi Fleiss, but you better believe I ended up on the news that night.

Bodes not well for the future, madame :)

your mom had a serious sense of humour! hahahaha! How outrageous you look compared to those wanna be street walkers! hahaha

Sally Forth, the prostitute, huh? I gotta tell you I read that and cracked up! Too doggone funny! You even have a great "come hither" look about you too -makes it all that much more comical in a weird, serious kind of way. I know, I know -sometimes I don't understand myself either.

OMG! All those little girls were dressed up all prostitute like by their mommas? Too funny!

hahaha that is awesome!
I so know what my girl is dressing up at Halloween :P

You wore silever heels at four years old?! Jocelyn, you are my hero.

Puss
PS. I hope you're not still charging twenty bucks - the dollar's worth nothing these days...

Of course, I mean 'silver'.

You were such a lovely hooker. Damn, girl, you obviously missed your calling!

Oh My, that is way too funny!

you are dadgum amazing. i knew you were good people from the moment i saw yer fishnet hose, ho.

LOL!!!! oh you ARE my psychic sister....though i admit i was 12 or 13 before i did my streetwalker routine on stage.

so if i ever make it to your neck of the woods i guess we'd best be careful if we go out at night.

Whoa - what was you're mother thinking? You actually look adorable, but it seems like you shouldn't.

Step. Away. from the Scanner.

All the four year olds I know can walk about in high heels far better than I ever will. Drat it all.

You are the cutest little street-walker I ever saw, by the way.

This is just too funny. At least you were an adorable street walker!

Well, now I see where you get it from.

Ten minutes for $20?! Sweetie, don't sell yourself short. You are priceless!

This essay is one of your funniest, yet!

I think my mother would have dressed me up as a prostitute too if someone put the idea in her head.

How did I laugh before you mastered the scanner?

The title alone had me on the floor. And then I saw the pictures. Oh,dear God, you are a dangerous read with coffee in the mouth.

LMAO. Very classy. You know if someone did that to their kid in these politically correct times, they'd probably get on the news too, but not in a good way. Ah, where have the good ole days of Etch-A-Sketches, Clue, Lincon Logs and 4-year-old hookers gone? By the way, you forgot the Silly Putty...I'm sure you had some of that lying around somewhere.

I've been reading for a while and am delurking to say that even if I didn't have you in my reader? That title would have hooked me.

Well, that just might explain quite a bit. Yesiree, that does answer a lot of questions. Lots of questions ...

You were a cute little tiny tart!
LOL. And to think it was all innocent fun. What the hell happenened to innocence?

Wow. I can't help but miss an America that encouraged its underage girls to dress up like prostitutes. These days, I've got to fly to Thailand for that kind of stuff, and with the price of gas these days...

Hey, I used to read the Billings Gazette and shop there and fly out of there, when I lived 80 miles south of there in Lovell, Wyoming. Duluth, huh? My son works for Duluth Trading Company, located about 6 hours south of Duluth down near the Illinois border in a little town called Belleville, Wisconsin.

Oh, boy. Here's your one chance, Fancy, don't let me down!

You were adorable, and don't seem to have changed very much.

I always wanted to be Miss Kitty on Gunsmoke because you sensed that she was a Bad Girl although they never quite said so.

I would kill for your hair.

Ah, those kinder, gentler times when prostitution was a cute costume suitable for tots.

Now it's business as usual in dressing one's child, apparently.

Where did you hang the plaque?