"A Basic Civil Right: Being Scatalogical"

What is it about little boys?

Why are the colon and its emissions so profoundly, continually hilarious to wee males?

These days, my four-year-old (who, in his defense, is heavily under the influence of a cadre of neighborhood seven-year-old fellas) toodles around the house, absentmindedly singing a little ditty of his own composition:

Sure, it's charming enough, and I'd wipe a quiet tear from my eye if Jordin from American Idol belted it out on her first album,

but, really? Enough with the fecal talk, okay?

There's just something about testosterone + humor that unerringly = da butt.

Last night, I was reading a book to the kids called Hello USA! It's a dumb Hello Kitty book, but we're stretching here in the house to meet our seven-year-old daughter's fascination with maps, continents, oceans--all things social studyish, in fact--and Hello Kitty has been workin' the geography for us this week. 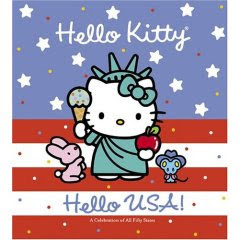 The book goes through each of the 50 states (get this: PLUS D.C.! Bonus!), giving little factoids about each one. I now know that

the Mid-America Windmill Museum is in Kendallville, Indiana

the Brown Thrasher is the state bird of Georgia

the pop-up toaster was invented in 1919 in Stillwater, Minnesota

the world's largest buffalo sculpture is in Jamestown, North Dakota

and the octopi found in Puget Sound are the world's largest


The whimsical overview of Americana crashed and burned, though, when we got to Alabama. On that page, I no sooner read the words "Birmingham Civil Rights Institute" than I was interrupted with

And again with the toot. And again.

A few minutes after the intial joy and amusement, "institoot" permanently entered the family vernacular; see, each night, after I get the kids into bed, they holler out for their pappy (who is generally downstairs wilting some bok choy and broiling some marinated flank steak on skewers) that it is time for him to come upstairs for squeezes and smooches. Of late, the kiddles have decided to beckon him not with a resounding "DAAAAAADDDDY," but rather by calling out for him with some cool-sounding word. To wit, they have been heard bellering "Onomatopoeia" to get him to come upstairs these last weeks. However, as of last night, thanks to The Kitty of Helloishness, the Girl has started hollering--yes, quite fun--"Okefenokee." But the Wee Niblet?

And male readers? 'Fess up: you never have stopped finding this stuff to be the pinnacle of humor, have you? I mean, I shouldn't wait, with breath bated, for this "phase" to fade away, right? Realistically, the lad will be pretty much tuned into the poop channel 'round the clock for the next three decades, ja?

If that's the case, I have one word: crap.

And it was just last month that my dear husband sent me a link about scatalogical humor. I've somehow managed to lose it but I'm sure if I ask, he'll be able to tell me exactly where it is!

There's a reason I didn't give birth to boys...I can barely handle the one I married! LOL

ok, in 'psych of personality', we learn from a prof who clearly states that MOST psych theory is BS:
that, the way you treat your kids' bowel movements defines their view of self.
To as you say, wit... that song of the young master Niblit's? Is a pretty prime example of healthy self esteem.
And, the esteem of others. ("we are all poop")

I am gonna go out on a limb here, and guess... when he made his first few dookies on the big boy pottie, did you by chance, praise him and act as though he had just done something amazing?

I think that the way that the book describes it is:
Setting the child up to view his feces as golden.

as opposed to just flushing it down the shitter and getting on with the day.

Both camps have their drawbacks.

I, myself, am from the fool's gold crap camp, personally.

i am going to ask your forgiveness right up front here...

i'm not sure i'd say mr. lime has continued to see the humor potential in poop into his balding years but he certainly is fascinated by it. in our early years of marriage he called rather urgently from the bathroom, 'honey, come here, come here now!' thinking there must be some problem i hurried my naive little self to him where he implored me to peer into the bowl at the wondrous creation that filled it. masking my revulsion after acquiescing i informed him as lovingly as i could that although i wanted us to have open communication and share our lives intimately i never wanted to be beckoned to toilet gaze again unless he was medically concerned about something.

unfortunately my SIL has never set my husband's brother straight and even though he is 50 he still regales her with detailed descriptions pertaining to the evacuation of his bowels.

i am sorry i can ofer no real hope here.

This applies not only to boys. My girls love jokes about poop, butts, farts and pee (caca, culo, pedo, pis), with no signs of getting tired of the subject in the near future. I'm waiting for the day when we can throw out the whoopie cushions and fake dog poop.

Now, if you'd just read the book with an English accent, all that palaver would've been avoided. It's 'In-sti-t_you_t' Tsk.

No. It only gets worse: Louder and more frequent. There's some variation, though, as words like "fart", "excrement" and "derriere" make their way into the conversations. They become multisyllabic and mulitlingual. You may take to alternating between developing the ability to actually not hear such words and then banning the next person to say one from the dinner table.

There is no hope, and girls are not immune, especially if they are the younger sisters of the boy. The little sisters act as the accelerant to the fire that is the Boy.

Yeah, men never get over it... as all your commenters seem to prove.

I recognize the tune of the pooper head song - That's "Goofy Goober" from the Spongebob Movie.

Here's one of my favorite fart jokes...

Q: What's invisible and smells like carrots?
A: Bunny farts

ywtbulMy girls are silly over body functions such as-ahem, gas (burps on the other end) and burps (and aim to be the loudest burpers), especially the youngest one. Hopefully they'll grow out of it soon. After all, it's not "ladylike." ;)

Funny post! Hey, thanks for stopping by my blog and for telling your own story. Come again soon, please.

I hope this isn't an example of what you have to look forward to. Check out Snay's post:

I'm afraid one of my huband's favourite phrases, which he uses to "compliment" someone who has just done something smart or clever, is: "You're a fart smeller". And one of his endearments he uses on the dogs is "you little turd".
V.

Four brothers, one husband and two grown sons later: yes, I agree it's poop channel hell for you.

My husband has a theory that all conversations eventually reach the scatalogical point. In our family, this is usually the case, and dear Ekim always sounds the alarm when we have, indeed, arrived. Why are farts so funny?

the brown thrasher is our state bird-- hence, the Atlanta Thrashers. although, their uniforms make them look all tough and rough- in reality they are these tiny little birds. go figure.

I have to agree they don't seem to get over it. Also my 6 year old daughter is totally obsessed with butts and poop so girls aren't immune. Of course I'm sure the boys helped initiate her interest!

I absolutely loved your post and your topic. Being male, I apparently was condemned to like it due to my hormonal makeup! I crack up at "pooper-scooper" all de time.

Little boys, big boys... Yeah, things don't change that much. lol. I am, of course, the very definition of maturity

So true and it will never end! 'Twill ever be thus! You should see my husband's rugby team! They're not much better than the Gr. 2 boys I taught, all gathered on the carpet for a story...if someone farted they'd go nuts with the plugging of noses and fanning them with the other hand and various vocalizations to express the enormity of stench!

My nephew was put on the Thinking Chair in Kindergarten for using toilet language!

My brother is 43 and still thinks that farts are profoundly funny. Sorry.

I suppose that the fact that there's no shortage of fart-related greeting cards for men is a good indicator that it never ends.

Good luck! So far my boys haven't gotten into scatalogical humor, but my luck can't hold out forever.

Would that it were just the wee males...in this house, it's the larger sized ones who are always calling each other poopy heads...and yes, in those words!

Your kids sounds so cute. What a joy to have in your life.
At least he is saying poop and not the s word.
Yes, it will only get worse.:)
tc

this is absolutely craptastic.

this is absolutely craptastic.

Gosh I wish I had only known...I have been battling the demons of my own sh*tty committee this week! All I had to do was come here to see the humour...

This hits a bit close to home as I have an 11 year old male and a 33 year old male under my roof, and neither of them have lost the "poop funny bone" you speak of.

However, I was the one give homeade poop soap for Christmas a couple years ago, and I quite enjoyed it. Once I got my nose close enough to smell it (which took some guts) it smelled like peppermint.
It LOOKED like poop.

poop and farts stay funny until the very end.

You are so right. And in far too many cases, they never get over it, which still astonishes me when I encounter it.

But I still don't get the "humor" in farts and poops. I am a victim of my own estrogen.

No, you should not wait - it's a guy thing until they die. One of the dads who chaperoned my son's cabin last month said to the boys, "You'ns are a bunch of turdballs." My boys are STILL saying it.

Thank goodness my kids are over the phase they went through of peering into the toilet bowl to see what fantastic shapes they would find there. My youngest has
excreted an entire zoo of animals over time. Now if she will just stop drawing bags of the stuff complete with squiggly lines to show how bad it smells I will be happy.