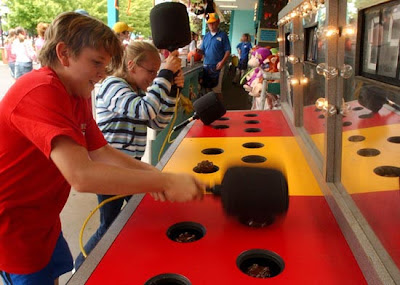 You know how it's important for a parent to mess with her kid, just to make sure he's ready for the Whac-A-Mole game that is middle school?

I do; therefore, I view every day as a "mess-'em-up-early-and-hard" opportunity.

While the Wee Niblet still has affection for his Pokemon cards and is always game for a Yu-Gi-Oh duel, he's recently expanded his faux-manga-based-consumer-merchandising passions into Bakugan territory, as well.

Pretty much, Niblet is hot for Bakugan's balls. 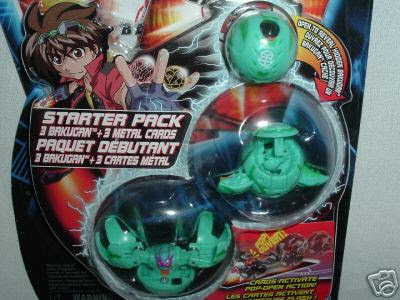 Admit it. They're strangely attractive, weirdly soothing, these balls. You want to cradle them in your palm, don't you?

Don't be coy. One glimpse, and you can sense they give good hand.

If you don't believe your own impulses, you can believe Niblet. He's an expert in holding little balls, and he finds the Bakugan Battle Brawler balls very satisfying.

In fact, he is so enchanted with them that he keeps the Bakugan brawlers in his pockets, where he can massage them, roll them, and tweak them.

Even better, I like to get him talking about what he's doing: "Hey, kid, whatcha got there in your pocket?"

"Yea? Whatcha doing with them, toots?"

Then I let about three minutes pass before asking, "So, buddy, you seem to be touching something in your pants there. What're you doing?"

Next mission: get him to explicate, with great volume ("EEEH? Cain't hear ya, kid. Speak up!"), at the mall, about what he's got in his pockets. I may enhance this activity by having him take along the Bakugan wrist-shooter, into which the brawler balls can be inserted and then ejected. There we'd be, in front of the Eddie Bauer store, me asking, "Whatcha doing now, poodle?"--and him answering, "Just making my widdle balls shoot out."

After the tortures of Mommy Boot Camp, middle school is, in comparison, going to feel like an easy stroke of the tool.
Tossed Out by Jocelyn at 3:26 PM

Priceless, and a quick read too. LOL.

you're a naughty gal. i'll be happy transformers stop living in my house.

You've got style, Jocelyn. Can you find him anything more sausage shaped? Just a thought.

Someday that kid is going to be paying me to talk about this.

Now, what are you going to do when he's 12 or 13 thinking its JUST FINE to pway with his widdle bwalls in public? hehehehehehehehehe.

You're going to pay when he reads this someday, you realize.

I, for one, think it was worth it.

No, I mean you know.

hahaha!
Good to read that we are not the only parents torturing our children in preparation :P

I'll have you know I'm the Whac-a-Mole world champion. Although, in Middle School I was the mole.

As for the widdle balls, I'm not going there. Must he be so darn cute?

again, i am left to ponder the havoc we could create if we were ever to meet face to face. bwahahahahaha!!!!

I'm always amazed at all these toys that exist. Not having kids just leaves you totally clueless.

you know originally, "Hot for Teacher" was actually penned as "Hot for Bakugan's Balls" someone from the record label came in during recording and voiced their concern that not enough American consumers would get the reference to the then uninvented toy.

Heh, heh, heh. Don't tell me you'll be surprised when you end up in the stinky, urine and canned peas smelling old folks home in a few decades.

Then we'll see who ends up holllering about 'widdle balls' to all and sundry.

(Of course, I'm still taking notes from you.)

That is so wrong, it is just right.

As an occasional baby-sitter, I take great delight in warping little minds but I never realised that parents did it to their own kids!

That's funny, but you know that it's going the medical bills for his therapy are going to cost you.

You're a little bit evil, but just SO FUNNY too!

And besides, playing with balls can be very therapeutic.

My mum always said that "we'll talk about it when we get home" when I brought up stuff like that. You know, when I was little.

Bwuahahahahahahaha!!! Nice. NICE!!! It's the only real joy you know, we parents get sometimes....;)

My roommate's son got a text message from one of his girlfriends during Christmas break. It read:

I'm playing with my brother's wii. It's not as hard as I thought.

They're 15, so chances are you'll be able to continue to use your kids for Beevis and Butthead moments for many years to come.

Get all that on tape and you have a good blackmail material for the teen years.

Naughty girl. I need to sick you on the Other Mother in today's blog post. Pretty please?

So Joc, I kind-of, sort-of tagged you on my blog. Kind of.

OMG, Niblet should never ever read this post or you may have to use his college fund to pay his therapy bills!

The things we do to prepare 'em for adolescence. You go, girl.

Wow. I used to have those same comments, only we couldn't afford any toys. We had to drive several counties away to get groceries.

I'm glad that it is still appropriate to use one's own children for comic value!

what are you doing massaging your bakugan you lesbian